Striving for the best diesel performance tuners available, SCT once again has updated multiple products and features. The all-new SCT X4 and Livewire TS now include tuning for 2013 and 2014 Ford Super Duty trucks with the 6.7L Powerstroke diesel engine.

The X4 is SCT’s handheld tuner. It comes pre-loaded with 3 dyno-proven tunes to make more power and improve fuel mileage. SCT is known for delivering some of the biggest gains in fuel economy, and the X4 is their most popular tuner for delivering easy, convenient mileage gains. It’s not short on power though, allowing you to add up to 88 Horsepower and 101 Ft. Lbs. of Torque in just minutes! The X4 for 6.7L Powestrokes is packed with features and is an impressive value for today’s diesel truck owner.

SCT’s top-of-the-line Livewire TS Programmer comes with the same tunes as the X4. The Livewire also comes with a large 4 Inch color touch screen display. Just like the X4, it can also hold up to ten custom SCT tune files, reads and clears trouble codes, and a host of other features. The Livewire TS Performance Programmer and Monitor unlocks your vehicle’s hidden performance by re-calibrating your vehicle’s computer for maximum horsepower & torque, increased throttle response, firmer shifts and even increased fuel mileage. 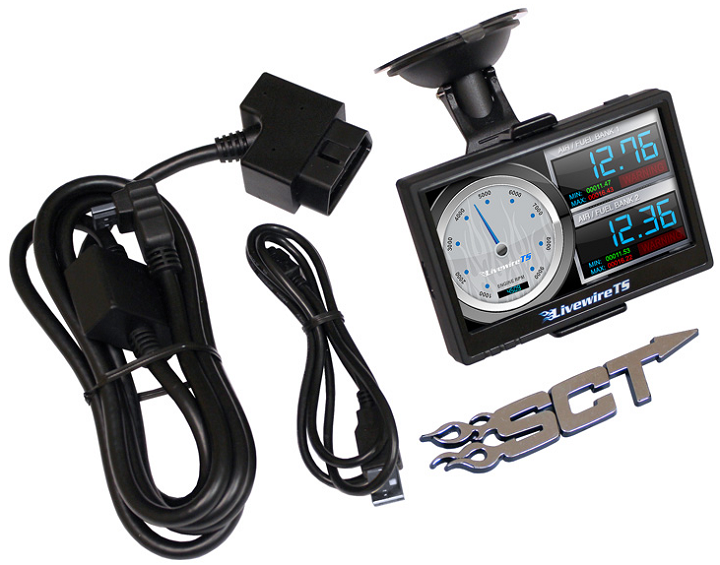