Not Available to Ship to California

Parley’s Diesel presents the new ECM Tuner for Detroit and Mercedes from Bully Dog Big Rig. The ECM Tuner is a simple platform to load Bully Dog’s independently SAE tested tuning to your truck. This ECM Tuner also reads and erases trouble codes and has the ability to adjust the speed limiter. It provides the same tuning as Bully Dog’s Heavy Duty Gauge Tuner but does not include the the gauges and driving coach of the HDGT. 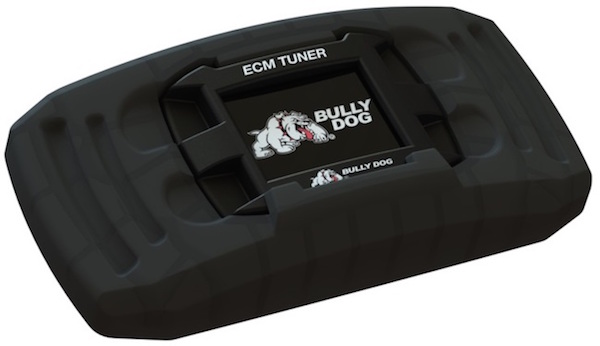 Bully Dog Big Rig’s ECM Tuner for Detroit and Mercedes is a response to fleet owners looking to tune and go. This heavy-duty tuner is streamlined to include 3 power levels, a speed limiter calibration feature and Diagnostic Trouble Code Reader. The beauty of the ECM Tuner is in its simplicity; you simply select the desired power level for the drive ahead, complete the install and store the tuner in your vehicle to enjoy the perks of Bully Dog tuning.

Bully Dog has invested significant resources in research, engineering and testing into the ECM Tuner. Designed with the one goal of adding bottom-line profits through lower fuel consumption costs, the ECM Tuner delivers. Return on Investment with an ECM Tuner is often realized in a matter of months, not years — saving drivers and fleets real money every haul. Bully Dog is serious about Big Rigs, and it shows in their dedication and the work they’ve put into their Class 8 tuning.

Not legal for sale or use on pollution controlled vehicles based and registered in California.